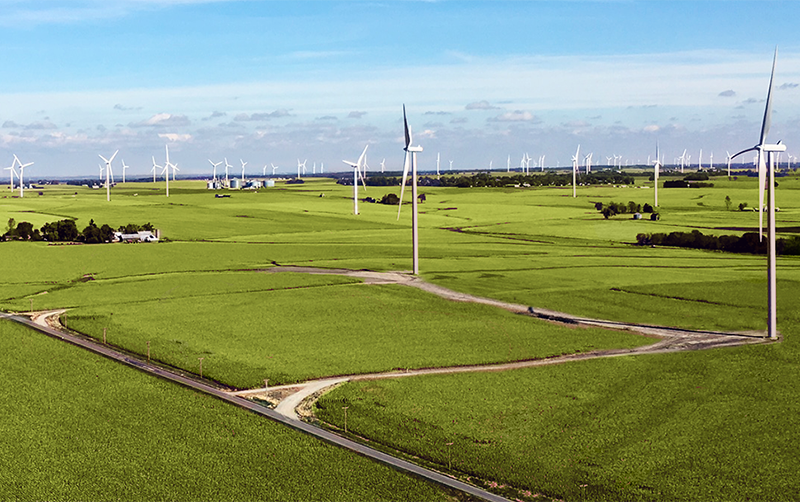 According to the American Wind Energy Association, wind produced enough electricity last year to power more than 26 million American homes. As part of our commitment to sustainability, MKEC is proud to partner with firms that help increase the use of renewable energy across the U.S.

Wind farms generate non-polluting electricity by using the energy within prevailing winds. Giant turbines sit atop towers hundreds of feet above the ground, where wind flows freely without trees or buildings to impede it. As more and more people turn to alternative power sources, it has created intense demand in this country. And as the cost of wind technology continues to decrease, wind farm development in the Midwest is ramping up. Many organizations are helping to meet the demand by erecting wind farms in the Midwest.

“Contrary to solar, wind power is very space efficient and has a high upside for rural economics.”

Over the last several years, MKEC has contributed to renewable energy production across the U.S. by participating in multiple wind generation projects. In particular, our Electric Utility and Instrumentation and Controls groups have supported owners and their subcontractors in various project phases including design, construction, and power production.

MKEC played a part in constructing the largest wind farm in Nebraska, spanning more than 50 square miles, when it was completed in 2016. It generates enough electricity to power 120,000 Nebraska homes via the Omaha Public Power District. Each turbine takes less than an acre out of production, and many are strategically placed in corners of irrigated fields, where their impact on crop production is even less.

“There are now 100,125 megawatts (MW) of wind energy with over 57,700 wind turbines operating across the United States – enough to power more than 26 million homes.”

We are invested in helping to diversify America’s clean energy production through wind power. The engineers and technicians at MKEC are creating sustainable solutions to power a brighter future.