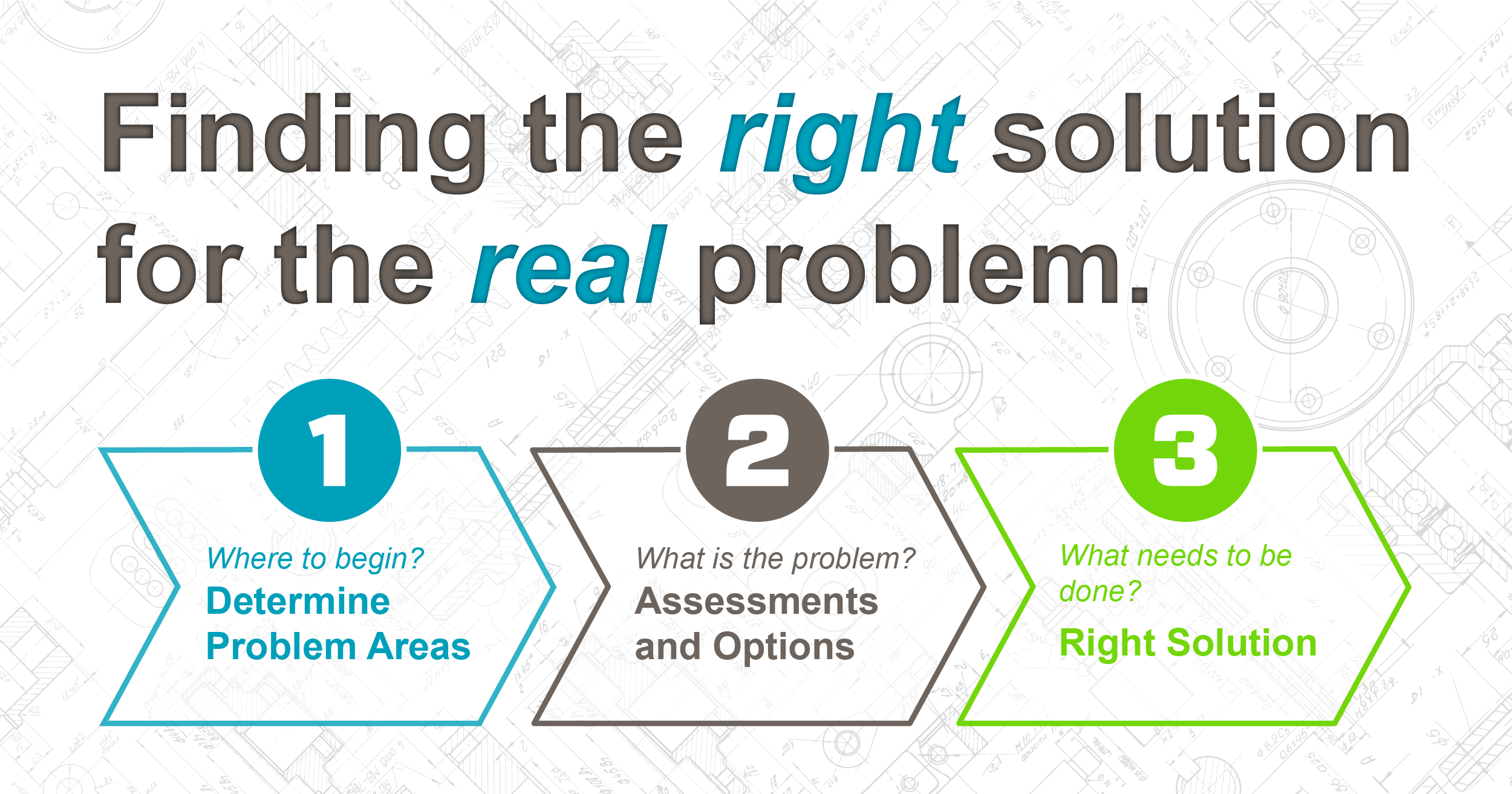 In 1875, Alexander Graham Bell was working to develop the harmonic telegraph when he accidentally discovered that sound could travel across a wire. Two years later, he filed a patent for the first telephone, and the rest, as they say, is history.

Just as with the invention of the telephone, our experience has shown us a single discovery can change the entire course of a project. That’s why we include a discovery phase in our projects – so we can uncover all of the issues that need to be addressed before we start planning a solution.

Before we begin offering solutions, we want to make sure that we understand the problem. That means gathering data documentation, visiting the site, and talking with all the stakeholders, from engineers to the operations team to residents near the site, to get an accurate understanding of what the problem is.

During the discovery phase of a project, we sometimes find that the problem our clients have identified is simply a symptom, not the real problem. Taking a complete look at all the factors involved in a project allows us to identify the actual problem as well as understand the concerns of those impacted by any potential solution.

“Taking a complete look at all the factors involved in a project allows us to identify the actual problem as well as understand the concerns of those impacted by any potential solution.”

A good example of this happened on a recent project where our team had been called in to improve the capacity of a lift station in the sewer system. After talking with the operations team, we discovered that grease from a nearby chicken processing plant was continually causing problems with the pumping equipment when it ended up in the wet well. The operations team asked us to add a grease trap.

After careful analysis of the problem, we developed a design that would separate out the grease as part of a phased plan to increase capacity. We didn’t just add a grease trap; we solved the grease problem. But we would never have known grease was a problem if we hadn’t talked to the operations team and involved them in the process as part of our discovery phase.

While the discovery phase can lead to a solution that is different than the one the client had in mind, sometimes what we discover is that the best solution is doing nothing.

When we were asked to fix the cracks and paint the inside of a leaking concrete water tower in Hutchinson, Kansas, we encouraged the City to contract us for just the discovery process. After examining the documentation from when the tower was originally built, we learned that the cracks weren’t the only concern to be addressed. The water level was. If the water was kept at the current level, then the water would never even reach the cracks and the leaking problem would be solved.

Working with the City, we looked at the City’s total water storage and what impacts the water level would have if it was just maintained below the problem area. The city decided to do nothing to the concrete water tower and was able to focus its resources on rehabbing the city’s steel water tower instead.

Designing municipal projects often means the city council, residents and even visitors to a town or city need to be considered before designs are developed. The work done during the discovery phase of a project is key to getting everyone on board before work starts.

A trail project in Edmond, Oklahoma, is a great example of this. A new trail that would run along a creek to Arcadia Lake was to be built on Army Corps of Engineer land. However, this land backed up to several residential communities.

During the discovery stage of this project, our engineers went into the neighborhoods and spoke with residents at their homes, allowing them to voice their concerns and show us how the new trail would impact them. In some cases, we were able to make adjustments to accommodate homeowners’ concerns. In others, we couldn’t make adjustments, but homeowners’ appreciated having their voices heard.

With the possibility of so many stakeholders being involved in municipal projects, communication is a crucial piece of the process. Many of the people affected by a project aren’t engineers, so it’s important that we communicate information well to stakeholders without a technical background.

Balancing stakeholder interests with budget and technical constraints is made easier with good communication between all parties from the discovery phase through to completion. And sometimes the best solution isn’t the most technically correct one.

“Sometimes the right solution isn’t always the best engineering solution. We always search for solutions that please our client, but we also try to gain consensus from stakeholders too.”

Our job is to discover the right solution for the real problem. To do that we often produce multiple options that take into account different stakeholder desires. We also offer our experience-based recommendations as to what works best.

But every solution starts with discovering the problem, and sometimes, like Alexander Graham Bell, our work in the initial stages results in a discovery that changes everything.

Using our proven process of right solution for the real problem, we have helped dozens of municipal clients solve their problems. Tap into our experience for innovative and cost-effective solutions.